Given how much of our lives are lived in the digital arena, the premise of Free Guy isn’t that far fetched.

Ryan Reynolds (Deadpool, The Hitman’s Bodyguard) stars as Guy, an optimistic bank teller who is a background character in a brutal open-world video game.

Given how realistic his coding is, and the characteristics put into him by his creators Millie and Keys, Guy as no idea he and his home – Free City – isn’t real. It’s not until a “flaw” in his coding exposes him to the world outside the game, that Guy decides to take control over his own destiny and save the virtual home he learns is under threat.

Watching Free Guy, it takes a minute to separate Ryan Reynolds from his Deadpool alter ego but, once you do, you see an entirely distinct story about a character discovering the boundaries of their own control and navigating the ever-blurring line between reality and fantasy.

Advances in technology mean Guy has an unprecedented level of consciousness compared to other NPCs – non-player characters – and his coders face the ethical dilemma of how their real-world decisions will affect his virtual life.

As Guy decides to go “off script” and rebel against the nature of the game, players begin to notice, and “blue shirt guy” becomes a viral phenomena as he breaks the rules of a game that rewards destruction and celebrates self-gain.

Free Guy may be a fun, youthful adventure, but it asks some big questions about how being a “good guy” impacts our success in life, and what the consequences of going against the grain can be. It considers the importance of waking up to your own agency, and how that affects others.

It’s a shame Free Guy didn’t get its initial cinema release (although some are picking it up after lockdown), given the visual feast it offers for the big screen. However you watch it, Free Guy is exciting, thoughtful and funny.

Free Guy is streaming on Disney+ and in select cinemas now. 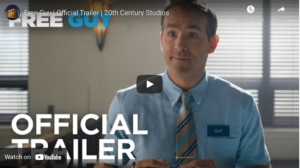 Faith Sharing Tip: Bring Church out of the Building

The Insanity of Listening to Everyone’s Opinions

A Human Right or a Privilege?

Pandemic Causing an Increase in Spiritual Openness Amongst Australians