Joel and Luke Smallbone of Christian pop duo For King & Country added to their Grammy collection at the 62nd Grammy Awards, held over the weekend at the Staples Centre in Los Angeles.

The boys had previously picked up Grammy’s for their 2016 album Run Wild. Live Free. Love Strong as well as their single Messengers with rap artist Lecrae.

Joel and Luke payed tribute to Dolly  during and after the ceremony telling the audience that working with the superstar had been a career highlight.

“She loved the song (God Only Knows), because it reaches out to the marginalised, the depressed and the suicidal, which is all of us at some point.  In her Dolly accent she said – I’m going to take this song from Dollywood to Bollywood to Hollywood and we did it.  We took it all the way!”

We couldn’t be more grateful for a pair of wins tonight at the Grammy Awards, and we wanted to share this very special moment with you all as we got the news that God Only Knows had won a Grammy. Massive thanks to all of the writers, Josh Kerr, Jordan Reynolds, and Tedd Tjornhom pic.twitter.com/Q54Tf5p4QU

The lads also paid tribute to Australians caught up in the recent bushfire disasters, encouraging Americans to keep travelling to their homeland.

“If you were ever planning to go to Australia for a second honeymoon, a holiday or that sort of thing go now because unfortunately a lot of people aren’t going there on holidays right now.”

For King & Country toured Australia for the first time in January 2019 and said it was a real homecoming.

“We had a heap of our cousins in the audience as well as our 92 year old grandmother.  It was the first time she had seen us play live, which was so special as she provided the beautiful cursive writing on the Burn The Ships artwork.”

Would God Tell You who to Marry?

God Uses My Past — Hernán’s Story 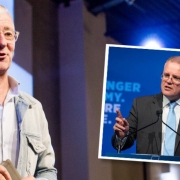 “Every AM, Pray For Your PM!” – Scott Morrison’s Former Pastor on the Challenges of Leadership

Hope for Those With Little Faith

Why I Thank God For My Painful Mid-Life Crisis