Blog - Latest News
You are here: Home1 / Articles2 / What Black Panther Says About Humans Will Shock You

Black Panther is the latest instalment in the Marvel franchise. Scoring 97% on Rotten Tomatoes, it is the #1 movie at the box office right now. But what makes this movie so special?

The movie plays with the themes of daddy issues, isolationism, and good versus evil.

But it is breathtakingly so much more than that.

The female warriors—eg Nakia (Lupita Nyong’o)—are portrayed as strong, wise, and capable. And T’Challa is portrayed as benevolent, sophisticated, and nuanced.

In contrast, the Americans—CIA Agent (Martin Freeman) and Killmonger (Michael B. Jordan)—are deliberately portrayed as bumbling, unsophisticated, and one-dimensional buffoons.

This restores balance in the Hollywood universe. For too long, the only roles offered to African Americans have been parts where black people are portrayed as slaves, servants, drug-dealers, gangsters, victims, warlords, or tyrants. And Africa itself has been filmed as a dirty, corrupt, third world continent.

Finally, Black Panther answers those cries. And we cheer.

But where do our cries come from? Because if—as we’ve been told—a human is only atoms and molecules, then any talk of human rights and dignity is only an imaginative construal that we impose upon ourselves. If all we are is another species of animal, then any talk of equality is meaningless in a hierarchical universe where power and oppression are the only game in town (just ask any wasp, killer whale, or lion).

So if human dignity is to be real, is has to be more than a portrayal by a movie. More than just a fictional construal imposed upon us by Hollywood. More than just the wishful thinking of a screenwriter.

The only way we can have a high view of each and every human being is if we have a God who has a higher view of us, than we do ourselves. A God who makes us in his image.

Our cries for justice, equality, and dignity are actually a cry for Jesus …

… a Jesus who himself cries out, “As you do to the least of these, so you do unto me.”

Article supplied with thanks to Espresso Theology.

About the Author: Sam is a theologian, preacher, author, evangelist, ethicist, cultural analyst and medical doctor.

What is Nutritional Yeast?

The Day Jesus Messed Up His Nice-Guy Image 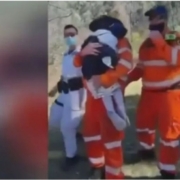 Finding an Escape from Sexual Addiction

7 Strategies for When Your Child Accidentally Finds Pornography

The Morning Dawns and the Evening Fades
Scroll to top