Blog - Latest News
You are here: Home1 / Articles2 / He Came as a Refugee, Now His Sci-Fi Surgery Changes Lives

When a small group of amazing Australians gathered in Canberra for the naming of the “Australian of the Year”, one of those sitting in the audience, on the edge of his seat and holding his breath, was Professor Munjed Al Muderis.


Munjed, the Australian of the Year candidate for NSW, is the Iraq-born surgeon who came to Australia as a refugee in 1999, and famously went on to pioneer a futuristic form of surgery called osseointegration.

What began as a boyhood dream while he watched The Terminator movie, Munjed has turned into a reality: fusing robotic parts onto humans. But, unlike in many movies, Munjed’s incredible sci-fi work is not being used to destroy, but rather to restore mobility to amputees, and transform peoples’ lives for the better.

Munjed escaped the evils of Saddam Hussein’s dictatorship, after he was asked to use his surgical skills to cut off the ears of political dissidents. He fled at the risk of being shot to death, and took a long and winding journey that landed him at Christmas Island in a leaky, non-seaworthy boat.

He then spent a year in Curtin immigration detention centre in Western Australia (an experience he describes as “hell on earth” due to inhumane treatment), before being granted refugee status and allowed into the Australian community.

Immediately he began working towards his dream of making a positive difference in the world.

Munjed started out his working life in Australia cleaning toilets – a long way from his life as a young man in Iraq where he admits he once lived a life of privilege, “with a silver spoon in his mouth”. The tough times he experienced, shaped and transformed him to become a force for positive change in the world.

Eventually, after sending out 100 resumes, he found a role in medicine at Mildura Base Hospital, where he was able to having his surgical qualifications recognised. From there he was trained to be an orthopaedic surgeon, specialising in hip, knee and reconstructive surgery. This started him on the road to developing his cutting-edge ‘osseointegration’ technology, which is now used all over the world.

“Munjed has taken surgical teams back to his childhood nation of Iraq at his own expense, to help the victims of the war he fled…”

Munjed has since taken surgical teams back to his childhood nation of Iraq several times at his own expense, to help the victims of the war he fled, and has trained other surgeons in the techniques he developed.

He now advocates for the human rights of others, supports people seeking asylum and refugee status, and is an ambassador for many organisations including the Red Cross.

In an interview Munjed said he was humbled to be NSW Australian of the Year and hopes to use the profile it has given him, to be a positive voice for change.

The 7th Day of Christmas: Filling the World with Kindness

Could You Leave Me with a Scar? 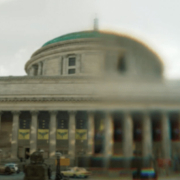 The City and The City: Living In Formational And Worshiping Distance

How To Make Delicious Dairy-Free 'Milk'

Gone To Soon
Scroll to top