Blog - Latest News
You are here: Home1 / Relationships2 / How to Navigate Differences in Your Relationship

Having some differences with a potential spouse is inevitable. But which ones are red flags?

“His parents are divorced,” she said, concern etched in her voice. “If you marry him, you’ll have to balance two sets of in-laws — and that might get tricky. You may want to keep that in mind before you get too serious.”

Ted and I had only been dating for a month or two — and, it was true, we came from very different family backgrounds.

While my parents had been married 25 years, his had divorced when he was in middle school. Each had remarried shortly after, and Ted had spent the following years splitting his time between his parents and their new spouses. It was a family dynamic I knew little about.

But that wasn’t the only difference we brought to our relationship.

There were small ones that seemed less important. I was a stickler for being on time; he wasn’t — not by a long shot. I loved holidays; he didn’t. To him, holidays were “just another day.” My mornings started before dawn; he consistently slept in late.

There were also differences that loomed larger. I’d only had one serious boyfriend prior to Ted; he, on the other hand, had experienced the pain of two broken engagements. We were raised in different church denominations and, as a result, I tended to approach my faith more emotionally, while Ted responded more logically. There was also the fact that we were born in different decades. We brought a 12-year age difference to our eventual marriage.

The list goes on, but you get the idea. While we entered our relationship with many commonalities — including a shared faith — we found ourselves navigating a lot of differences, too.

For us, some differences have proved harder to navigate than others. Surprisingly, our age difference hasn’t been one of them. The things that have been difficult include our drastically different schedules and our approach to conflict and grief.

Maybe you’re currently in a relationship, and some of your differences are the harder-to-navigate ones. Maybe they are even more complicated than divorced parents, time management or an age gap.

Perhaps your date didn’t grow up in a Christian home and while he or she does profess faith in Christ, you notice a lot of spiritual immaturities and not a lot of growth. Or there may be ongoing family issues related to his or her parents and siblings. This might include addiction, anger issues, someone in prison, or control and manipulation. Or perhaps the other person has a complicated sexual past.

How can you tell if these issues are red flags to be wary of or if you’ll be able to work through them together as a couple and grow stronger as a result?

Consider your date’s attitude toward differences

When it came to Ted’s previous engagements, I listened carefully to how he talked about them. When he reflected on the failed relationships, he was quick to take responsibility for the part he played in them. He didn’t assign blame to his ex-fiancées or justify poor decisions.

When particular family members, life events, spiritual growth or past failures come up in conversation, what is your date’s response? What is your response? Is it characterised by an attitude of humility and vulnerability … or is your conversation marked by defensiveness, dismissiveness or justification? If it’s the second, it may be wise to seek out advice from a mentor, parent or pastor who knows you both well.

It’s also helpful to think about whether these differences are serving as a teacher for your date. While Ted and I came from different family structures, each of our backgrounds sent us into marriage with a strong desire to beat the odds. His parents’ divorce and my parents’ long-lasting relationship instilled in us a determination to commit to “until death do we part.”

Are family issues, a sexual past or other complicated differences serving as a teacher for you and the person you’re in a relationship with? Do you see each other learning and growing in character and godliness as a result? If the answer is no, again, you may want to turn to a trusted advisor for input.

But how do you know if a difference is more than something to seek counsel about, but is indeed a deal breaker? Because, the fact is, some are.

For example, if your theological discussions regularly turn into arguments, you may not be on the same page spiritually. The truth is, how you approach Scripture directly affects who you are and how you mature in your faith. It also impacts whether you end up attending church hand-in-hand and how you’ll raise future children.

My one relationship prior to Ted was characterised by us being in two different places spiritually. I was actively growing in my faith, while he was apathetic and intentionally distant. If I’d chosen to acknowledge this earlier on, realising it was a deal breaker, I could have saved myself heartache.

Also consider your individual dreams and goals for the future. Are they compatible?

Perhaps one of you longs to have kids one day, while the other doesn’t. While it’s true that someone’s decision on this may change, you shouldn’t assume it will. It’s better to go into marriage with similar, not contrasting, desires in this area. And, if you do both want kids, what does your ideal household structure look like? Will you both work, or will one of you be a stay-at-home parent?

Areas such as these affect how you live your life as a couple. If you find yourself experiencing anxiety and unrest when it comes to certain differences, you need to pay attention to these red flags.

It’s important for couples to be able to grow together — and if you’re starting off with fundamental differences that already cause division, you may need to acknowledge them as deal breakers.

Once you’ve determined that a difference — whether big or small — is something you are willing to navigate together, then what? How can you actively appreciate differences, and even grow closer as a result?

Here are a few things that have worked for Ted and me.

Build on common interests
When we met, we shared a mutual love of music, Mexican food, travel and Jesus. These are interests we built on then — and still do today. In doing so, we focus less on our differences.

That’s not to say we haven’t had to actively work together to figure out how to sync our conflicting schedules or what it looks like to grieve differently — we have. But one of the ways we’ve kept our differences from dividing us is by building on our common interests.

I invite you to do the same. Instead of focusing too much on your differences — say you love theatre and your date loves sports — invest in those areas where you share commonalities. If you both love sushi, spend time seeking out the best spicy tuna roll in town. Or if there’s a big spiritual maturity gap between you, yet you both love theology, join a couples Bible study.

Be OK with some differences
Ted and I don’t share a love for politics. While he’s strongly opinionated and likes to stay up-to-date, I prefer to more quietly contemplate and pray about current events. You won’t find me engaged in any online Facebook debates.

There have been — and sometimes still are — moments when I want to change Ted in this area. But I have to actively remind myself that it’s OK that we don’t approach politics the same way. When it comes to core values, we tend to be on the same page and that’s what matters more.

Is there a difference you and your date face that you can stop trying to change?

Maybe he or she doesn’t like to read much, and you love it. Your dream of sitting side-by-side on a park bench and reading isn’t likely. Or maybe you love musical theatre, and he or she hates it. These are areas where it’s OK to step back and say, “We’re different … and I can live with that. I’m going to let you be you.”

Let the differences stretch you
Sure, I may not love politics like Ted, but that doesn’t mean we don’t at least try to take an interest in what the other likes. We’ve both learned to stretch ourselves.

Because of Ted, I’ve learned to love — and even crave — both Indian food and sushi. And, as a result of my influence, Ted now enjoys old black-and-white movies.

Take something your date loves, and if you think you don’t care for it, give it a try. You might just discover what you believed to be a difference is now a shared interest.

Anticipate additional differences in the future

Over 15 years later, Ted and I still discover new differences. One we’ve faced the last several years is how we grieve. As we’ve walked through loss, we’ve noticed that our personalities strongly affect how we react to and express sorrow.

I’m what some may label a “full immersion” griever. I let myself intensely experience the five stages of grief. I cry regularly and openly express to others exactly what I’m feeling. But Ted engages loss with less emotion. He “does” rather than “feels.” I’ve had to learn to recognise and support his approach, rather than seek to make him respond identically to me.

The truth is, even when a couple is actively growing together, there will still be differences. But when you anticipate this reality — rather than feel threatened by it — navigating differences together is a little easier.

It’s also important to refuse the temptation to put the other person in a box. Let me explain.

Do you ever feel like your parents put you in a box sometimes? Meaning, they forget to account for the growth and change that has happened in you as you’ve matured. Maybe you hear things like, “You always have been …” The same thing happens in romantic relationships, specifically marriage.

The reality is that none of us is static. So as long as we’re living, we all change — without exception. I encourage you to remember this, to allow the other person to live outside whatever box you might be tempted to place them in. Give them room for growth.

For Ted and me, navigating our differences, which for me includes having two sets of in-laws, has been tricky at times. But the years have taught us that within our one-flesh marriage, we can — for the most part — appreciate each other’s differences. And, even in those instances when we can’t, we’re committed to working through them together.

Article supplied with thanks to Focus on the Family Australia.

About the Author: Ashleigh is the author of the books Braving Sorrow Together: The Transformative Power of Faith and Community When Life is Hard and Team Us: The Unifying Power of Grace, Commitment, and Cooperation in Marriage. Focus on the Family provides relevant, practical support to help families thrive in every stage of life.

Get Your Praise From God 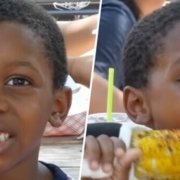 Why We Love the Corn Kid So Much

Giving Your Marriage a Second Chance

Jon Foreman: Why I Refuse to Hate the Haters
Secular Activists Make A Lot Of Assumptions About Christian Schools

Responding to a Society Becoming Increasingly Hostile Towards Christian Vie...
Scroll to top