Blog - Latest News
You are here: Home1 / Articles2 / Indigenous Message of “Love From Above”, on Australia’s Got Talent...

A young indigenous Aussie who fuses native language, music and dance with electro-beats – and sings of “love from above” – is winning the nation’s heart with a golden run on Australia’s Got Talent.

Mitch Tambo, a self-described “proud Gamilaraay and Yuru man” from Melbourne, was given the Golden Buzzer – that’s a fast-track to the semi-finals – after his audition on the TV talent show.

He performed Walanbaa, his own original song combining Gamilaraay language, dancing, and yidaki playing (a form of didgeridoo).

The song comes from Mitch’s independent 2018 album Guurrama-Li, and in his performance, Mitch shares the meaning of the word:

The world “Guwiirrnga-li” simply means love,
Coming from above, just like a white dove,
Yes a message of peace, a message of hope.

The spine-tingling performance wasn’t his only Golden Buzzer; in the show’s semi-finals, which aired on Sunday night, Mitch was awarded another golden ticket to the finals. This time, for his performance of John Farnham’s You’re the Voice in traditional language.

On Facebook he explained his choice of song: “I chose to perform such an iconic song to encourage others to be a voice for love, equality, and to celebrate my identity… To hear so many people from all over Australia singing along with me in English and language gives me hope that our culture and language will continue to survive and thrive.”

Mitch, 29 years old, comes from Aboriginal tribes of the NSW North West and North Queensland, and has been playing the yidaki since he was 16.

“I’ve had a strong passion for my culture from a young age,” he told NITV. “I wanted to learn song, dance and law. Part of that journey was picking up a yidaki and it all snowballed from there. I am a contemporary player and depict my stories and journey through song.”

In his social media posts, Mitch often speaks of hope and love: “No matter what you’re currently going through remember you are loved beyond measure,” he writes in one post. “Let’s keep uplifting one another and let love rain.”

“Remember you are loved beyond measure. Let’s keep uplifting one another and let love rain.”

In a poetry performance, Mitch draws attention to the problems faced by the Aboriginal community, including domestic violence, child incarceration, the diabetes epidemic, and young indigenous male suicide – the highest of all suicide rates in the world.

Rather than guilt-inducing, his lyrics are spiritual and life-affirming – infused with hope for healing:

Guwiirrnga-li, yeah love, Now let it rain on you, cover you, smother you,
Like our ancient songlines always be true,
My creator, your creator, our creator, is no hater,
It’s time to say see ya later to all the hurt and pain

We must never forget our ancient pathways
Break the chains off your chest, open up your heart let love do the rest, be blessed
Don’t give the voice of hate life, Run to the light, you can do it
And you know your future’s shining bright

Then get dressed up, not messed up but blessed up,
Fill your heart with joy, make some noise,
Sendin’ love across the nations
Like shootin’ stars across the constellations,

Just receive it, believe it,
Know you’re worth it, you deserve it
You were born, born with a purpose, And hate is overrated
And love, Guwiirrnga-li is the greatest

Give Thanks in Every Circumstance 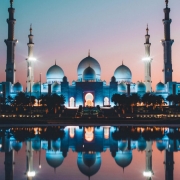 “Jesus Spoke to me in a Dream.” Does God Speak to those who don’t know him?

Hillsong’s Robert Fergusson on How to Let God Speak Through Your Life Story
A Dad who Loved with All His Heart!

From Weakness to Strength
Scroll to top