With all of the superhero options for people to consider, filmmakers are looking for a unique opportunity that will allow them to fly above the rest.

Samaritan was initially seen in the lesser-known Mythos Comics graphic novels and provides audiences with an aging hero. The latter has quite a bit of baggage to carry. Director Julius Avery (Overlord) delves into this dystopian world where people need a saviour who will save them from their hopeless existence and the crime-riddled city streets.

Before the fall of the city’s justice system, Samaritan and his twin brother, Nemesis, had filled the roles of hero and supervillain. Until one fateful night when they fought their last battle, both had supposedly perished in an industrial explosion. This led to the rise of new crime lords and an underworld speculating if the superpowered siblings had died years earlier.

Meanwhile, Sam Cleary (Javon Walton) is a teen who does all he can to survive in one of the community’s poorer sections with his mother. As he tries to make his way on the streets, one thing that gives him hope is his belief that Samaritan still lives.

Across the street in one of the other depressing apartment complexes from him lives garbageman, Joe Smith (Sylvester Stallone). After a chance meeting with the unassuming public servant, Sam begins to believe that this might be the hero that he has been searching for throughout his young life.

As he does all he can to investigate Joe and his hermit-like lifestyle, a new crime syndicate comes into power under the psychopathic Cyrus (Pilou Asbæk). His crew has terrorised their portion of the city for years. Still, they develop new confidence when they come into the possession of Nemesis’ specially forged hammer.

His gang unleashes a new wave of crime across the city. Sam must determine if his speculations are true about Joe in time to save his mother and fellow city-dwellers.

What is evident from the outset of this film is that Mythos Comics writer Bragi F. Schut has developed a fresh new character worth considering. Within this crowded world of superheroes, Stallone provides an intriguing offering as the aging crimefighter.

Especially with Julius Avery’s vision that seems set in an 80’s movie set reminiscent of Robocop. Yet, despite its promising set-up, something happened along the way to delivering this story. Even with a well-timed twist that should make this a potential franchise, Samaritan never achieves its potential. 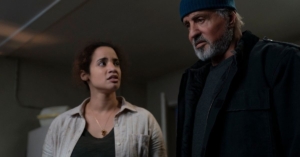 Some could say that it suffers from comparison to every Marvel and DC option in cinemas at the moment. If there is one thing this production has going for it, that would have been the casting of Sylvester Stallone. As an aging action hero, he personified this character on many levels. Except they took too long to get him to show his true potential and the whole third act feels like a cheesy 80s superhero television series. Then to incorporate the dark and rainy backdrop done throughout this genre, the movie fails to compare to the rich atmosphere of Daredevil. Suppose they had taken from James Mangold’s handbook and delivered something reminiscent of Logan. In that case, they may have been onto new heights with this character.

In the end, those looking for an alternative to the current lot of superhumans, you could do worse than Samaritain. Yet, this is truly a tale of a concept that did not live up to its potential, and most viewers may ask what it could have been.

REEL DIALOGUE: Who is the real superhero? 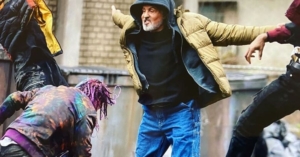 “And there is salvation in no one else, for there is no other name under heaven given among men by which we must be saved.” – Acts 4:12

We all want a saviour at different times in our lives. Regardless of your religious affiliation, there is a need for outside help during times of great struggle. This is an underlying theme of the Samaritan. This story shows how we all need something outside ourselves to save us from this world. This is true of the human condition; the saviour figure plays a role in the smallest to the greatest needs of our lives. During tough times, where do you turn for help?

…looking for the blessed hope and the appearing of the glory of our great God and Savior, Christ Jesus – Titus 2:13

About the author: Russ Matthews is a film critic at City Bible Forum and Reel Dialogue. He has a passion for film and sparking spiritual conversations.

God Uses My Past — Hernán’s Story

The Truth About Perfectionism 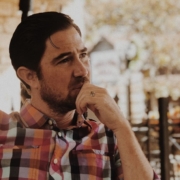 Why Do We Need to Ask God For Forgiveness?

Why The Atheists Are Right About Religious Discrimination In Australia

Dads: How To Stay Connected With Your Kids
“It’s Getting Harder with Every Crop We Lose,” An Aussie Farmer on Finding...

Why the World Hates Vegemite
Scroll to top