Astronaut Buzz Aldrin (above) was the second man on the moon behind Neil Armstrong on the historic 1969 Apollo 11 mission, and the proud inspiration for the naming of the Toy Story character, Buzz Lightyear.

It’s a lesser-known fact that Buzz was also a man of Christian faith and an elder in the Presbyterian church, and that he led the world in a moment of thanks during the Moon mission – followed by his own personal Communion.

In the leadup to the space voyage, Buzz had spoken to his minister about taking some bread, wine and a small, lightweight chalice onto the space shuttle. He wanted to have communion when they landed, much like Christopher Columbus and other explorers did when arriving in their ‘new worlds’.

“In an effort to remain calm and collected, I decided that this would be an excellent time for a ceremony I had planned as an expression of gratitude and hope.”

He chose the scripture John 15:5 for the occasion, to remember his reliance on Christ.

Buzz had spoken to one of his leaders at NASA about his plans, but was asked to keep his comments over the radio very general. They wanted to avoid trouble from a prominent atheist who was campaigning against public displays of Christianity at the time.

In his book Magnificent Desolation, Buzz said it was while he and Neil Armstrong were resting in the lunar module before their moon-walk, that he took the communion – as a means of saying thanks, and centring himself.

“It was hard to rest with all that adrenaline pumping through our systems,” he wrote. “Nevertheless, in an effort to remain calm and collected, I decided that this would be an excellent time for a ceremony I had planned as an expression of gratitude and hope.”

In a 1970 article in Guideposts, Buzz described the moment.

“I unstowed the elements in their flight packets. I put them and the scripture reading on the little table in front of the abort guidance-system computer. Then I called back to Houston.”

Buzz’s next words, heard by millions listening around world, were:

‘This is the LM pilot. I’d like to take this opportunity to ask every person listening in, whoever and wherever they may be, to pause for a moment and contemplate the events of the past few hours and to give thanks in his or her own way. Over.’

There was a 30-second silence from Houston before Mission Control replied with “Roger.” The radio was then muted and Buzz began his communion.

“In the radio blackout I opened the little plastic packages which contained bread and wine,” he writes. “I poured the wine into the chalice our church had given me. In the one-sixth gravity of the moon the wine curled slowly and gracefully up the side of the cup. It was interesting to think that the very first liquid ever poured on the moon, and the first food eaten there, were communion elements.

“And so, just before I partook of the elements, I read the words which I had chosen to indicate our trust that as man probes into space we are in fact acting in Christ. I sensed especially strongly my unity with our church back home, and with the Church everywhere.

“I read: ‘I am the vine, you are the branches. Whoever remains in me, and I in him, will bear much fruit; for you can do nothing without me.’ John 15:5 (TEV)

“It was interesting to think that the very first liquid ever poured on the moon, and the first food eaten there, were communion elements.”

In his book, Buzz says he “silently read the Bible passage as I partook of the wafer and the wine, and offered a private prayer for the task at hand and the opportunity I had been given”. He said that his colleague Neil Armstrong – who at the time was a Deist, “watched respectfully, but made no comment to me at the time.”

Years later in reflection, Buzz wrote that he might have done something different if he had his time again: “Although it was a deeply meaningful experience for me, it was a Christian sacrament, and we had come to the moon in the name of all mankind — be they Christians, Jews, Muslims, animists, agnostics, or atheists,” he wrote. “But at the time I could think of no better way to acknowledge the enormity of the Apollo 11 experience than by giving thanks to God.”

On the Apollo 11’s return flight to Earth, the three crew members gave televised speeches reflecting on their achievements. Buzz spoke about the curiosity of mankind, the symbolism of the flight’s emblem (an eagle carrying an olive branch)—and finally, reading out Psalm 8:3-4, noting the smallness of man compared to the magnitude of God and His creation.

“Personally, in reflecting on the events of the past several days, a verse from Psalms comes to mind to me,” he said. “‘When I consider the heavens, the work of Thy fingers, the moon and the stars which Thou hast ordained, what is man that Thou art mindful of him?’”

Why Jesus Isn't the Solution to School Shootings

If God Is Good, Why Is There Suffering and Pain?

COVID-19 and Our Foodie Culture. Will It Ever Be the Same? 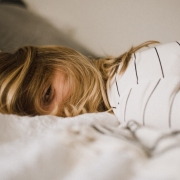 Burnout Begins With Weariness. Here’s How to Stop it Going Further

Archbishop Makarios Griniezakis Speaks Out Regarding NSW’s New Abortion B...
Scroll to top