Our History and the Christian Connection

For over two hundred years, the final resting place of the man ultimately responsible for the naming of ‘Australia’ was lost. Then in early 2019, his lead-plated coffin was discovered at the back of a train station in London.


An accomplished explorer, he has the largest mountain range in South Australia named after him, as well as the longest river in Queensland, an island in Tasmania, two national parks, a university, and streets all over the nation—including a famous one in Melbourne.

His father wanted him to become a surgeon but, inspired by the wildly popular adventure story Robinson Crusoe, he opted to go to sea. By the time he was 20, he had already served on ships at war with France and had taken part in a celebrated naval battle.

He died when he was 40. During his short lifetime, he:

This feat of sailing around the coastline demonstrated that the English-claimed colony of ‘New South Wales’ and the Dutch-claimed territory of ‘New Holland’ were in fact one vast continent. So he recommended that, rather than try to compromise between those two names, a new one was appropriate—and he suggested going back to something quite similar to that which had been used by Ferdinand de Queirós in declaring the ‘Great Southland of the Holy Spirit’ in 1606. He proposed the name ‘Australia’ and, as a consequence, Bungaree became the first person ever to be described as ‘Australian’.

On his return to England, he stopped at Mauritius, because his ship needed urgent repairs after being virtually wrecked. The French governor there, suspicious he was a spy, detained him for six years.

His health suffered and, although he eventually returned to England, he died the day after the publication of his journals and maps in what was to become a widely praised book and atlas: A Voyage to Terra Australis: Undertaken for the Purpose of Completing the Discovery of that Vast Country, and Prosecuted in the Years 1801, 1802, and 1803, in His Majesty’s Ship the Investigator. He wanted to use the name ‘Australia’ in the title but was pressured to change it.

So who was this remarkable Englishman?

His name was Matthew Flinders.

A great cartographer, a lover of literature who read the latest novels, a researcher who at the very end of his life was conducting pioneering studies into magnetism on ships, Flinders was also a man of faith. His private letters reveal that his thankfulness to God. In them he calls on heaven in his sufferings; he exhorts his newly wed wife—whom he’d hoped would accompany him to New South Wales—not to give unbelievers a cause to doubt her reliance on God when they were seperated* by naval regulations; he blesses her journey and asks God to crown her with health; he discusses his theological thoughts on Adam and Eve and the fall, as well as the Holy Spirit.

Australia’s landmark explorers—the great navigators who charted Terra Australis, the ‘Great Southland’ such as de Queirós, James Cook, William Dampier, Abel Tasman and Matthew Flinders, were men who relied on God as the sailed perilous seas. Their Christian legacy is an enduring one and should not be forgotten.

* And here it’s spelled the way he would have wanted. Flinders had a strange obsession with ‘seperate’ instead of ‘separate’.  He even told his younger brother off for getting it wrong—when, in fact, Samuel had got it right!

Article supplied with thanks to DIDUNO. The DIDUNO Network is a group of people dedicated to and passionate about educating and informing the next generation of Australians of our Christian heritage.

What is the Fruit of Love?

Catholic Believers React to the Conviction of George Pell

One of The Best Things You’ll Hear Today: You Are Known 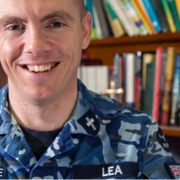 From Soldier to Servant: An Australian’s Journey from Conflict to Chaplaincy

Is TikTok OK For My Kids? Psychologist Collett Smart Helps You Decide

What To Do When Your Child Lashes Out
Scroll to top