Blog - Latest News
You are here: Home1 / Articles2 / What a Little Girl Named Phoebe Can Tell Us About Ourselves


One different sperm, one different egg in generations of ancestry, and you and I wouldn’t be here.

I got reflecting on this after meeting a guy named Paul one morning, who proudly mentioned that his fourth child was due any day. But there’d been complications…

My friend DJ and I met Paul on the last day of the pilgrimage that became The Making of Us, the conversation moving to Paul’s family life and the excitement around their new arrival.

“Have you found out the sex of the baby yet?” I asked Paul.

I thought of that little girl with her unique body and matchless face—Dad’s nose perhaps, Mum’s lips, maybe the chin or hair from a great-grandmother somewhere, that unique body and face even now already a someone because of the fabric of relationships she’s woven into. Right now, still unborn, she was a daughter and a sister and a grandchild and a niece, and soon to be a friend, a neighbour and a citizen.

“Has the pregnancy gone well?” I asked.

“Actually,” Paul said, “it’s been stressful. All the signs are pointing to our little girl having Down syndrome. That’s been hard to face, but the real stress has come from medical staff who’ve treated us with disdain for keeping her, saying we should try again for a ‘normal’ child.”

That little girl, with her unique body and matchless face, would soon be born, given the name Phoebe, and bring all sorts of joy, personality and talent into the world. Without her the world would miss out on a daughter, sister, granddaughter and friend. Scripture describes her as being fearfully and wonderfully made, whatever her physical challenges—reflecting something of God’s own nature, carrying not just human but divine value.

Try again for a ‘normal’ child?

That little girl was sacred.

I was sharing this story at a secular conference for childless couples recently—an audience of men and women wondering what to do with their lives now they may not become parents. After I’d spoken, a woman approached me in tears.

“I’ve been wondering all day why I was supposed to be here, but now I know,” she said. “I needed to hear about Phoebe. I’ve been so focussed on becoming a mother that I’ve forgotten I’m already a daughter, sister and friend. I’ve felt worthless being childless and I needed to hear that I’m fearfully and wonderfully made.”

One sperm, one egg, one unrepeatable existence. I believe what’s true of Phoebe is true of all of us:

Full of personality and talent.

We too are fearfully and wonderfully made.

Article supplied with thanks to Sheridan Voysey.

About the Author: Sheridan Voysey is a writer, speaker and broadcaster on faith and spirituality. His books include Resilient, Resurrection Year, and Unseen Footprints. Get his FREE eBook Five Practices for a Resilient Life here.

Are You In a Mid-Life Low? Take Heart – It’ll Get Better, Say Researchers

Why is the Resurrection of Jesus So Important?

Discouragement: What to Do When You’re Feeling Low

Getting Into the Zone When Working from Home 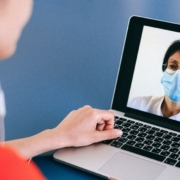 In a COVID World: Telehealth is Improving the Way Patients Are Cared for by Doctors

Success at School: IQ vs Personality