Borne out of Bethel Church in Redding, California, the music of Jesus Culture is known around the world for its lyrical power and heartfelt expression.


The team are prolific songwriters, having released over 30 albums as a collective and individual artists, and receiving a Grammy nomination for their 2018 album, Living with Fire.

Not many know though, that for worship leader Kim Walker Smith, her journey into music was birthed in the pain of an abusive childhood. In her first book, Brave Surrender, Kim opens up about her younger years, and how Jesus helped her find true healing and freedom from her past.

Kim said, “My childhood was pretty tumultuous most of the time. My parents divorced when I was four, and my Mum got married three more times after that… and two of those [stepfathers] were very abusive.”

“He was the first person who showed me that a relationship with Jesus could exist outside the walls of a church.”

Kim recounts times where she stood up to her abusive fathers to protect her mother, defended her younger siblings, and assumed the role of protector within her home. Lasting into her early teen years, it wasn’t until her third stepfather George arrived that Kim started to soften, and the family’s instability began to subside.

“[George] showed me the love of Jesus, in a real tangible way,” said Kim. “[He] loved and accepted me just as I am, even though I kept rejecting him, I kept pushing him away, I even told him how much I hated him… He was the first person who showed me that a relationship with Jesus could exist outside the walls of a church.”

In the years that followed Kim’s church attendance became more regular. The activity she’d once passed off as only ritualistic, became a place to encounter God’s love and express her gratefulness to Him in worship.

The Power of Vulnerability

Talking openly her past is a new thing for Kim, but when she wrote this book she knew it was time.

With Kim now happily married and mum to three children of her own, the transparency of Brave Surrender offers great hope to others with traumatic pasts. As Kim shares about having to regain her trust in men after being abused, Brave Surrender highlights the need to pair spiritual recovery with sound mental health counselling.

“I spent a few years seeing a counsellor and a therapist,” said Kim. “I know sometimes in the church it’s not something we talk a lot about… but it’s not one or the other; there’s both Jesus working in our lives, and there are people who work with [Holy Spirit wisdom] to help us in [recovery].

“It was a lot of hard work, but the work was worth it because I wanted to be a whole and healed person,” Kim said.

Kim says she still checks in regularly, reminding readers that walking in healing is a lifelong thing.

“This is what our journey with Jesus is all about; He didn’t die on the cross for one moment with us, but He died on the cross so that we have a lifetime of moments with Him. We’re walking through life with Him, and it is a process, and there are layers, but He’s with us in all of that.”

Finding Joy in the 'Now'

How Could This Happen Again? Reflection on Hillsong’s Carl Lentz ‘Fall From Grace’ 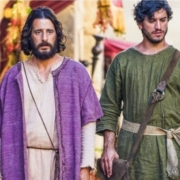 Autism Celebrated, Those Struggling with Alcohol and Addiction Embraced in ‘The Chosen’

How to Teach Your Children Empathy – and Why It Matters

Captain Marvel – Should She Really Be Our Leader? [Movie Review]

Amid the Devastation in Beirut, Aid Agencies Are Racing to Help

You Belong to the Lord
Scroll to top