Blog - Latest News
You are here: Home1 / Articles2 / Seeing the Eternal in the Ephemeral: Can Sport Point us Towards God?

When was the last time you simply sat back, embraced the moment and took it all in? For me it was over the weekend, seeing an annual tradition grow in significance and membership over the AFL Grand Final weekend.

Every year, I pack the car, catch the ferry and make my way with some high school mates to a friend’s shack on a beautiful island. No reception. No plans. No responsibilities. No vegetables. No kids. Until recently. My eldest son was finally old enough and ready to join us and the other young boys as we expand a tradition beyond its original shape, taking on new meaning, moments and memories that will last a lifetime.

And it was glorious. For oh so many reasons.

It’s been quite the fortnight for sports and royalist fans respectively (I can’t imagine there being many equally committed superfans of both). Between the Queen’s funeral, the special public holiday, and the events unfolding in the world of sports, many people might have found themselves trapped in a certain anchor man’s glass case of emotion. There was Roger Federer’s last game, then there was the AFL Grand Final week, overshadow by a bombshell report into the Hawthorn football club. Then there was the jubilation for Geelong players claiming the silverware again, in a performance for the ages. The tears rolled as the club’s greatest ever captain capped off his magnificent career in unbeatable style, with a fine goal in the dying minutes and a likely retirement announcement coming in the next few weeks.

One grand final review likened it to a 2.5 hour exorcism for the Cats after years of criticism, near misses, and heartbreak. The demons were vanquished and experience finally counted for something, as the battle hardened silver foxes ambushed the unsuspecting gaggle (or fittingly ‘lamentation’) of young swans. The stories and the narratives had found a stunning resolution and Cats fans around the country (and world!) could join in the celebration of an unforgettable season of a leather ball being booted through four tall sticks. I enjoyed sharing it with mates and my boy. No doubt it’ll be looked back on as a particularly special weekend.

It’s amazing how sport has become one of our cultures most powerful storytellers with fairly basic raw ingredients. Whether it’s putting a spherical ball in an elevated circle, driving spaceship themed automobiles at highly illegal speeds, or seeing how many spins, twists and turns the human body can squeeze in before a) successfully landing or b) breaking your favourite bones. There are all sorts of interesting combinations used to cook up an interesting sport, but like with a Thermomix the whole is greater than the sum of its parts. Especially when something or someone does the work for you.

For a little while, around 10 years ago, I had a mini-existential crisis working out whether I should spend as much time merely watching sport as I do. Whether it was all some giant waste of my time and attention when I could have spent that time helping others, thinking deeply about life, pursuing more meaningful endeavours. If only I could remember case law as well as my ability to retain and recall random sports statistics, like how many possessions (unrelated to earlier exorcism point) random players got back in 2007.

I made peace with it after a while though. Because ultimately sport is about things much deeper than the game or activity itself. It is yet another expression of human creativity, a vehicle for unity, leadership and collaboration, and above all a gift from above to be enjoyed in its right place. Sport is more than a sociological curiosity but fills an embedded need in our collective psyche, and I for one am glad it exists as it does.

It Pulls us Out of The Ordinary

There is something captivating about testing the human body, mind and spirit to the limits, breaking new ground, and doing it for the world to see. The high stakes nature of turning your body into your livelihood. The instinctive decisions and reaction times needed to make the winning plays. Mastering skills so niche and culturally unnecessary, yet still having the ability to give people hope, direction and a strange sense of salvation simply by witnessing these extraordinary moments by elite athletes.

The theatre and the drama pulls us out of the ordinary and gives people genuine hope, even if it’s origins are artificial and somewhat trivial in the big scheme of things. We love picking teams, following people, investing in them, studying them, and living vicariously through them. And for our modern gladiators to do it without swords, axes or bombs is a triumph for human moderation. Finding healthy (and lucrative) ways to display power, skill, supremacy and sound judgement in a fun and safe environment.

One of the things I love about sport its relational and inclusive nature. It’s not to be consumed alone, but to be shared with others who help you get there. Whether it’s regional communities, inner city types, young guys like Sammy Moorfoot or fawning economists – anyone can come along for the ride, partaking in the highs and lows of a club, or an individual’s journey. For the victors it’s a moment to bask in the splendour of the ephemeral. And then trying to replicate that feeling and build a legacy with each new season.

Why We Are Devastated When Role Models Fall

Sport both hits us where it hurts and where it heals. That’s perhaps why it can be so devastating when these role models fail us, and institutional abuses happen inside them. Sport, like all human inventions, has a dark side where winning the game can come at the cost of losing our conscience. Where it’s suddenly no longer a game, but a very real and perilous situation with real life ramifications, traumas and perpetrators.

There are many things that are bigger than sport. And unfortunately sports scandals remind us that there’s a reason we sit back and embrace good moments when they come. Because they tend to be few and far between. There are plenty of dark times crowding out and lurking near the good. And sometimes we never get to, or get back to those mountaintop experiences, with circumstances taking us to the brink – if not defeating us. So the uplifting moments are worth savouring when they come.

I’ll always remember hearing from a friend who talked about recognising and celebrating those ‘exquisite moments’ in life – after coming back from a near-death experience where his heart stopped beating for a number of minutes. Some things are a matter of life and death. Some things are merely a game.

As much as the Cats’ compelling story, and the joy it brought to hundreds of thousands of people can do – it’s a small fry in relieving the ills of this world. Providing a temporary burst of satisfaction for those fortunate enough to be invested in the right team and the right moment. But it likely won’t change our lives in any material or tangible way.

The Queen’s Funeral – Another Cultural Story

Similarly the Queen’s funeral was another captivating cultural story witnessed by millions. Like the Grand Final, both were profoundly spiritual events replete with large crowds and even more eyes on screens. Both a celebration of achievement and an acknowledgement of loss. Both with their own traditions, ceremonies and rituals. Yet one had far more reaching consequences, and one pointed to a reality beyond the ephemeral.

It’s one thing to point to the royal lineage and legacy (both good and bad) British monarchs have had on the world. But it’s another thing to see what someone with that kind of power and influence basked in.

I’ve never been particularly interested in the royal family, but Queen Elizabeth was a public and devout Christian who knew what could change the lives of people in material and tangible ways, and—from what I could tell—she spent a good chunk of her life advocating for those values. It wasn’t her vast and sweeping powers, which would end up as transient as a sports game, but it was basking in the glory of the eternal. Something that makes the criticism, the heartbreak, and the near misses seem trivial.

As a Christian, there is a vicarious aspect to the life of all believers, where scripture tells us that Christ lives in us, and we lived in him when he suffered on the cross – taking our shame, weakness and failure, but emerging the victor in the long game. And it’s a victory won for all of us, should we choose to accept it.

It’s in this reality that I find an utterly compelling narrative, an unparalleled level of inclusion, and an unfettered hope that the best is yet to come. Personally I find plenty of reasons to bask in the ephemeral moments, knowing they’re a taste of the eternal, and a celebration of God’s creativity. There’s abundant room on the bandwagon and sheer jubilation waiting for the victors.

It will be glorious. For oh so many reasons.

About the author: Aaron Johnstone is writer with Third Space, with a Masters from Sydney Missionary & Bible College, and a passion for connecting Christianity with culture.

Who is this Man? 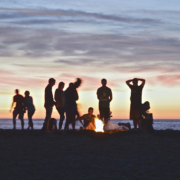 How I Would Have Handled the Resurrection

The Supernatural Power of Prayer

You're Doing so Much Better than You Think You Are 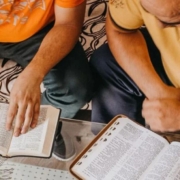 Report Reveals Christians Are Facing Growing Persecution
Why Repetition is a Powerful Tool for Marketers, Teachers and Leaders