Blog - Latest News
You are here: Home1 / Articles2 / The Top 10 Bluey Episodes to Revisit With Your Kids

The wait is over, with new episodes of the award winning ABC Kids show now airing.

To get you and your kids in the mood for new Bluey, here’s our top 10 episodes to revisit  with a Bluey binge!  They’re all available to view on demand via ABC iview. 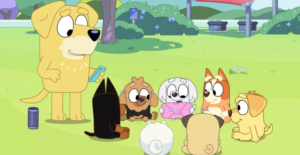 It’s a season that every parent’s been through – what feels like back to back, non-stop kid’s parties.

But when Lucky’s Dad finds out the new version of pass the parcel means a present in every layer so that no kid misses out, he wants to play it the proper way with only one big present in the middle; “the winner gets the lot”.

His fear, “we’re raising a nation of squibs”, could easily be a contender for best line from season three, and the kids learn a valuable life lesson that winning isn’t everything. 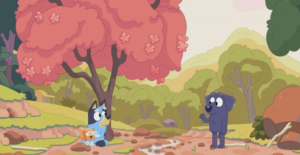 On a family camping trip Bluey meets the French speaking Jean-Luc, and despite the obvious language barrier, that doesn’t stop the pair from becoming the best of friends.  Imaginative play is how the two friends communicate, whether building cubby houses or hunting the wild pig (aka Bandit).

It’s an episode that reminds us that special people can come into our lives, and leave just as quick…and make sure you have the tissues handy for when an older Bluey and an older Jean-Luc reunite under the now fully grown tree they planted as kids. 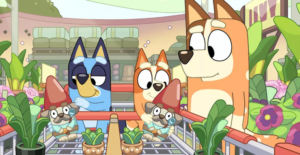 When Bandit sees that Lucky’s Dad has a new pizza oven, it’s off to Hammerbarn (the Bluey-verse’s answer to Bunnnings) to pick one up as well.

Bluey and Bingo learn to be content with what they have, because when you don’t, someone’s husband (in this case a garden gnome) always gets it!  Watch out for broadcaster Hamish Blake’s cameo appearance as he directs Bandit to the pizza ovens – if you hit a flamingo you’ve gone too far. 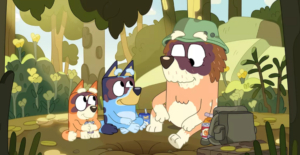 This is the first real big tear jerker on this list, and a fantastic example of how just a few words can tug at every parent’s heartstrings.

When Mum takes the girls out to visit Grandad on his property, he’s supposed to be resting up following a case of heartworm.  But there’s no way Grandad’s sitting still as he and the girls lead Chilli on a wild goose chase through the bush and across the lake.  In this episode we meet Grandad’s mate Maynard for the first time (voiced by comedian and Play School host Sean Choolburra).

As Grandad and Chilli watch the girls swim, Chilli mentions that she used to swim here a long time ago.  Grandad’s response – “No, that was yesterday” as Chilli morphs into a little girl will see every parent reduced to a blubbering mess. 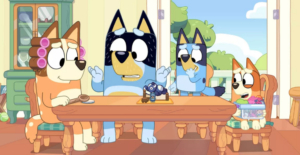 One of the more off the wall episodes of the first half of season three, Family Meeting sees Bandit on trial for allegedly ‘fluffing’ in Bluey’s face.

With Bandit’s food choices laid bare as evidence and a fluffy-meter that goes off the scale, it seems like he’ll be found guilty as charged.  But when Bluey is reminded that the truth will set her free, we find out exactly what she was doing at bum level ‘on the morning of this morning’. 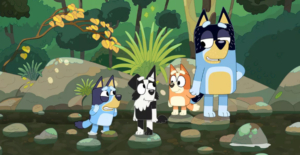 With stunning visuals and a soundtrack to match, this episode pays homage to the simple childhood joys of mucking around down the creek.

Bluey’s not sure about the creek; there’s leeches, yabbies and dragonflies to contend with, but even as Dad jokes about drop bears and warns about snakes, Bluey learns to relax and enjoy the surrounds of nature.

As for rock hopping through the creek – just take Mackenzie’s advice: “it’s just like jumping from one sheep to another!” 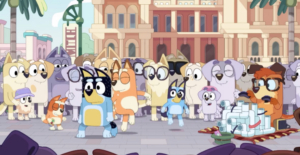 This is another episode that highlights the Heeler parents ability to join in on any game, no matter how humiliating or how many people are watching.

With the subtext being do we say yes to things when we really want to say no, Bandit and Chilli are forced to dance on command as part of the Dance Mode Game.

There’s plenty of fun to be had in this episode, alongside a heap of classic Brisbane locations, but my favourite bit is the interaction between Bandit and the postie (The Wiggles Anthony Field) and a classic sledge from the back of the post office line, “hurry up twinkle toes!” 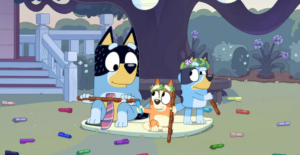 In what could very easily be composer Joff Bush’s best original score, Bandit must embrace his inner child if he wants to stay on Rug Island – a magical world where connector pens can be anything.

When Bandit proves his worth by saving the chocolate egg (Lucky’s Dad’s football), it is decreed that he is no longer a grownup and can stay on the island.  But ultimately when his ship (Chilli) calls him home there’s a decision to be made.

The last line in Rug Island is just one word, but it reminds us that if we embrace our inner child, let go of our inhibitions and play with our kids, they can take us somewhere truly magical. 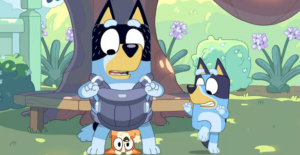 This is one of those episodes that shows off writer Joe Brumm’s comedic skills and sells us a simple message – if you’re going to do something, do it properly!

When the kids find their old papoose, Bingo jumps in and the resulting birth could well be one of the funniest things to ever grace Australian TV screens.

With Lucky’s Dad having been roped in to help with the birth, the nature of the Australian male is highlighted – no matter what you are doing or how important that task, one must always know the cricket score.  This episode gives us some of season two’s best one liners, and when commanded to sing, Pat (Lucky’s Dad) breaks out a classic with John Williamson’s ‘True Blue’.

If you’re a fan of British, Monty Python-esque humor, Dad Baby is right up your alley! 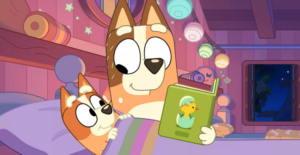 This is Joe Brumm’s masterpiece weaving celestial bodies and parent’s love into a simultaneous work of art and genius.

Sleepytime is an exploration of those in our familial orbits, of the parents at the centre of a child’s universe and the simple wish for a full night’s sleep.

With the motif from Gustav Holst’s ‘Jupiter’ appearing in sync with depictions of the parents love for the kids, and its crescendo to Chilli embodied as The Sun, Sleepytime is as epic as Bluey gets.

It’s an artistic feast and an absolute emotional roller coaster that sums up the genius of Joe Brumm and the Bluey art and animation teams. 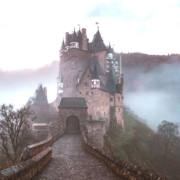 Your Kingdom or God’s Kingdom? 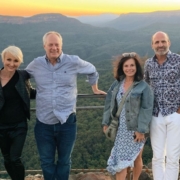 New Academy Aiming to Change Our Bitter-Sweet Relationship With Ageing 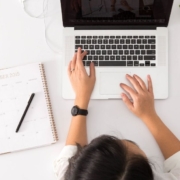 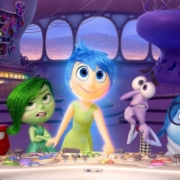 Concreter or Carpenter
Scroll to top